Last month we started the first of a five part series outlining the five key messages that differentiate SQL Server 2016 from its competitors. Now that we’ve covered what makes SQL Server 2016 an industry leader in mission critical OLTP, we’ll dive into security. 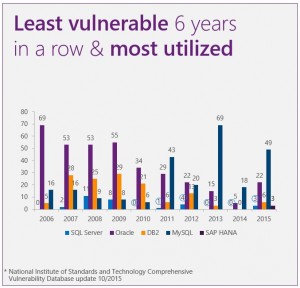 Take a look at the chart here from the National Institutes of Standards and Technology showing SQL Server 2016 as the least vulnerable database for the last six years. So how do you interpret this? You can see Oracle had 69 security vulnerabilities in 2006. That doesn’t mean issues weren’t fixed. The real issue for you as customers is two-fold: (1) your data is exposed until a patch is released and then implemented and (2) the number of maintenance windows you have to endure to keep your data secure. With SQL Server you have the least risk of exposure and the least number of maintenance windows.

And Microsoft has even more innovations coming in 2016 that will add to the layers of protection approach when it comes to security. Here are the highlights:

This is just the high-level overview of what’s new on the security front with SQL Server 2016. Want more info? Tweet us at @WeAreSolvaria. Come back next month for a look at what makes SQL Server 2016 the highest performing data warehouse.